In this section you'll learn where to find the most famous galaxy in the northern hemisphere, Andromeda Galaxy.

When to See Andromeda Galaxy

Along with the Orion nebula, the 31st entry in the Messier catalog - Andromeda Galaxy - is perhaps the most famous and viewed deep sky object by backyard astronomers.

That's with good reason: it is the brightest galaxy in our night sky and one of the brightest of all the Messier objects, shining at magnitude 3.4, which makes it a relatively easy naked eye object on a dark night.

Yet, there are some staggering facts that come with M31.

For a start, it is over 2.5 million light years away from us! You might be thinking that it must be a truly staggering size to appear so bright when it is so far away, and you'd be correct! I'll share some of the colossal numbers with you after a picture of our prey (source): 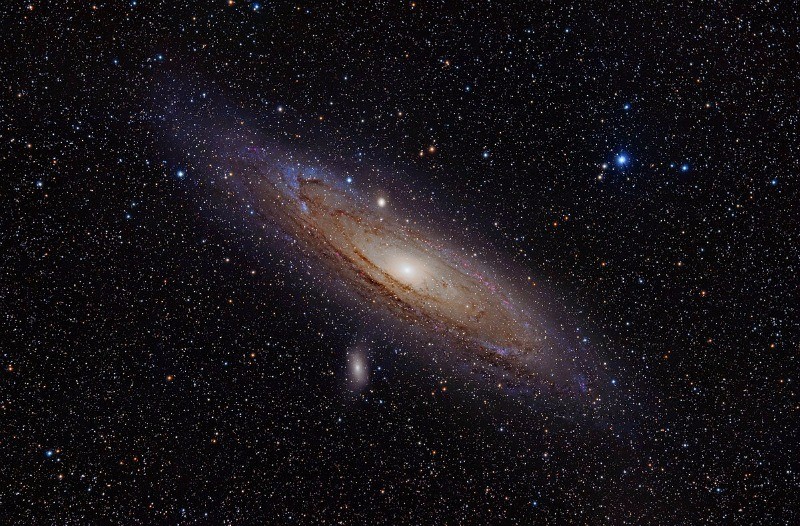 Estimates put the number of stars in the Andromeda Galaxy at one trillion! That's more than double the 300-400 billion stars estimated to be in our own galaxy, the Milky Way.

To hold all of those stars together, Andromeda spans some 230,000 light years from one side to the other. In our sky that means it spans around 3° in total, or 6x the width of a full moon. The reason we don't see it lighting up the night sky like the full moon is that Andromeda is a lot dimmer than the moon.

Even in our telescopes, we will only see its brighter central core, which is nowhere near as wide as the full 3° of the galaxy's spiral arms.

Let's take a look at where to find it.

Where to Find Andromeda Galaxy

At the times given above, you can find M31 about 60° above the eastern horizon, which is roughly two thirds of the way from the horizon to the zenith.

It lives between two very easy to recognize constellations: Cassiopeia, which is a circumpolar constellation for most of us, and Pegasus.

The picture below shows you where to look for M31. Both images only contain stars of magnitude 4 and brighter, and the left image includes the traditional constellation lines, whereas the right one does not.

Where to Find Andromeda Galaxy, With and Without Constellation Lines 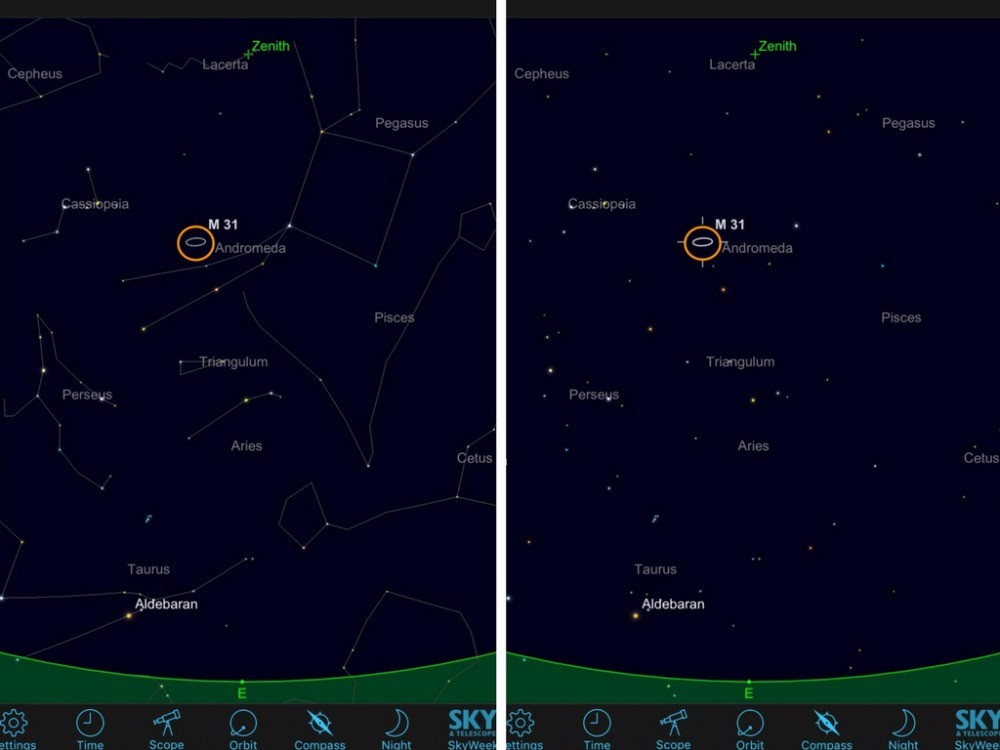 Thankfully, it's size, brightness and location in the sky all conspire to make Andromeda Galaxy an easy target to track down.

You can navigate your way there from the more familiar Cassiopeia, but I find that to be the more haphazard and less reliable route. Instead, it is much easier to succeed using the arms of the constellation of Andromeda itself, which I've highlighted in the close-up, below.

Finding M31 in the Constellation of Andromeda 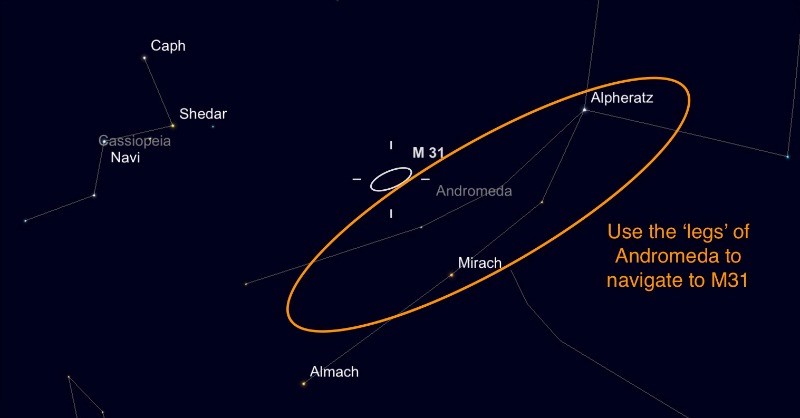 To begin with, get your finderscope centered on the star Mirach. This star is easy to find if you begin at either Almach at the end of the 'leg' or Alpheratz on the corner of the Great Square of Pegasus. See below for both routes.

Find Mirach and Center Your Telescope on it 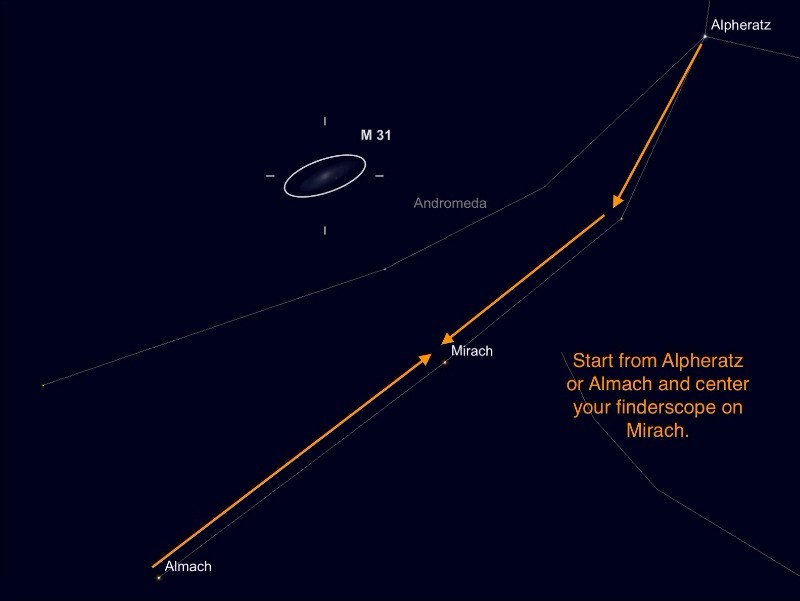 Now you are in a position to get Andromeda into your eyepiece.

From Mirach, move up to the star above in the other leg of Andromeda. This is a magnitude 3.9 star called Mu Andromedae. Carry on in the same direction for exactly the same distance and you will have Andromeda in your finderscope.

If you are observing under a dark sky, you may even see it with the naked eye (but it won't look anything like as bright as this screenshot suggests, sorry). See the picture below for how to do this move.

Find Andromeda Galaxy by Moving From Mirach to Mu Andromedae 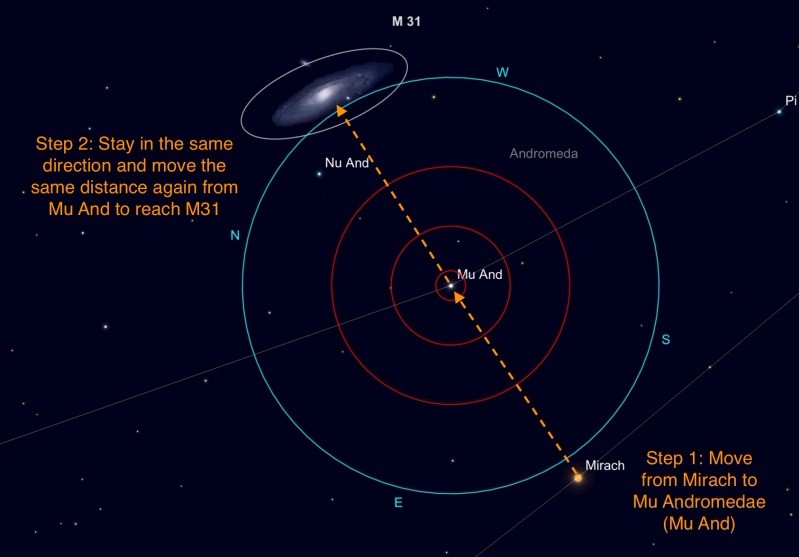 (Nu Andromedae - shown as Nu And in the picture) is also quite bright at magnitude 4.5 and is a good point of light to aim for if you don't see M31 itself. With Nu Andromedae in your finderscope, you will be close enough to the Andromeda Galaxy to see it in a wide-field (low magnification) eyepiece.

You are in for a gorgeous treat when you have M31 centered in your eyepiece.

Even the smallest telescope required for this course will have its field of view almost filled with the hazy blur of the galaxy at low power. Not only should you be able to see that the center of the galaxy is the brightest and thickest part - use averted vision to help - but you will also see another Messier object, M32.

This is the somewhat smaller companion galaxy to M31 and looks like a small blurry patch of light.

Both galaxies have enough light to cope with more magnification, so don't be afraid to up the levels and enjoy time studying details in the shape and form of Andromeda.

If you have a telescope with a larger aperture, you will let more light in and so Andromeda will appear wider - because you can see more of it. Can you see it in enough detail to make out the spiral arms..?

Next month we're going to hunt an open cluster of stars, which we've not done before.