In this section, you'll learn where to find the Orion Nebula.

When to See the Orion Nebula

We start the year with an opportunity to see the night sky's brightest nebula in perhaps its most recognizable constellation, Orion.

Look towards the southern horizon and about half way up to the zenith to see his unmistakable form dominating that part of the sky.

Let's start our hunt for the nebula with a look at the constellation as a whole. The screenshot below shows the stars in Orion which are brighter than magnitude four. The two views are exactly the same, but the one on the left includes the imaginary lines of Orion's 'body'.

Orion With and Without Constellation Lines 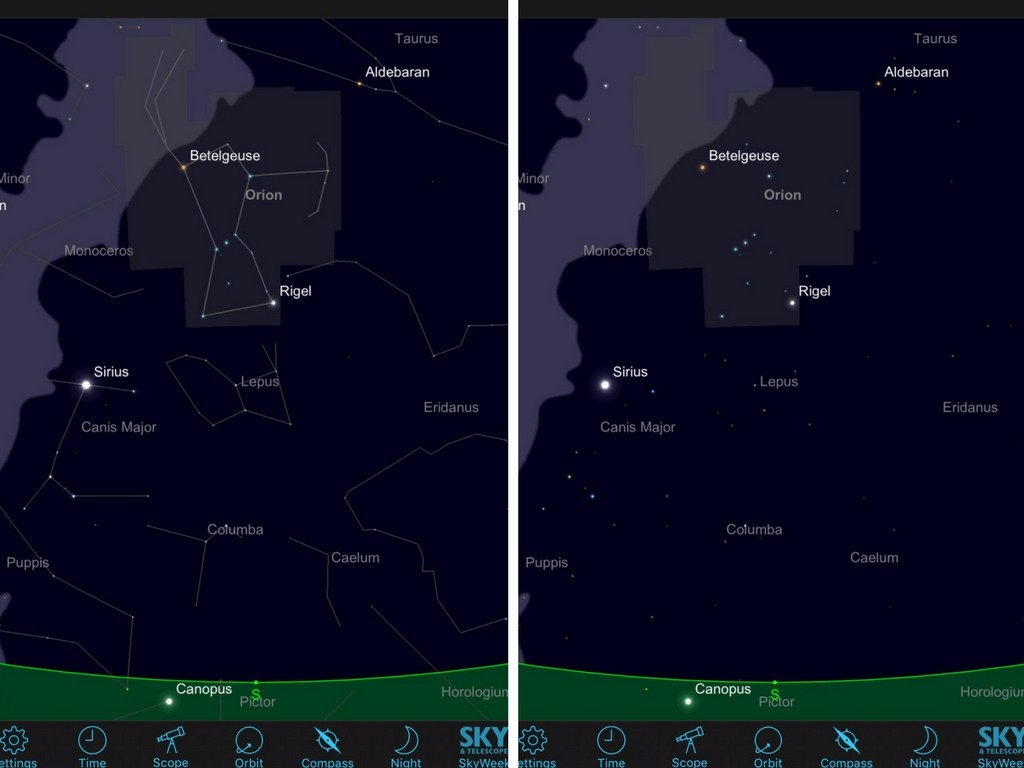 This next picture zooms in on his individual stars (still all brighter than magnitude 4) and puts names to the brightest ones. 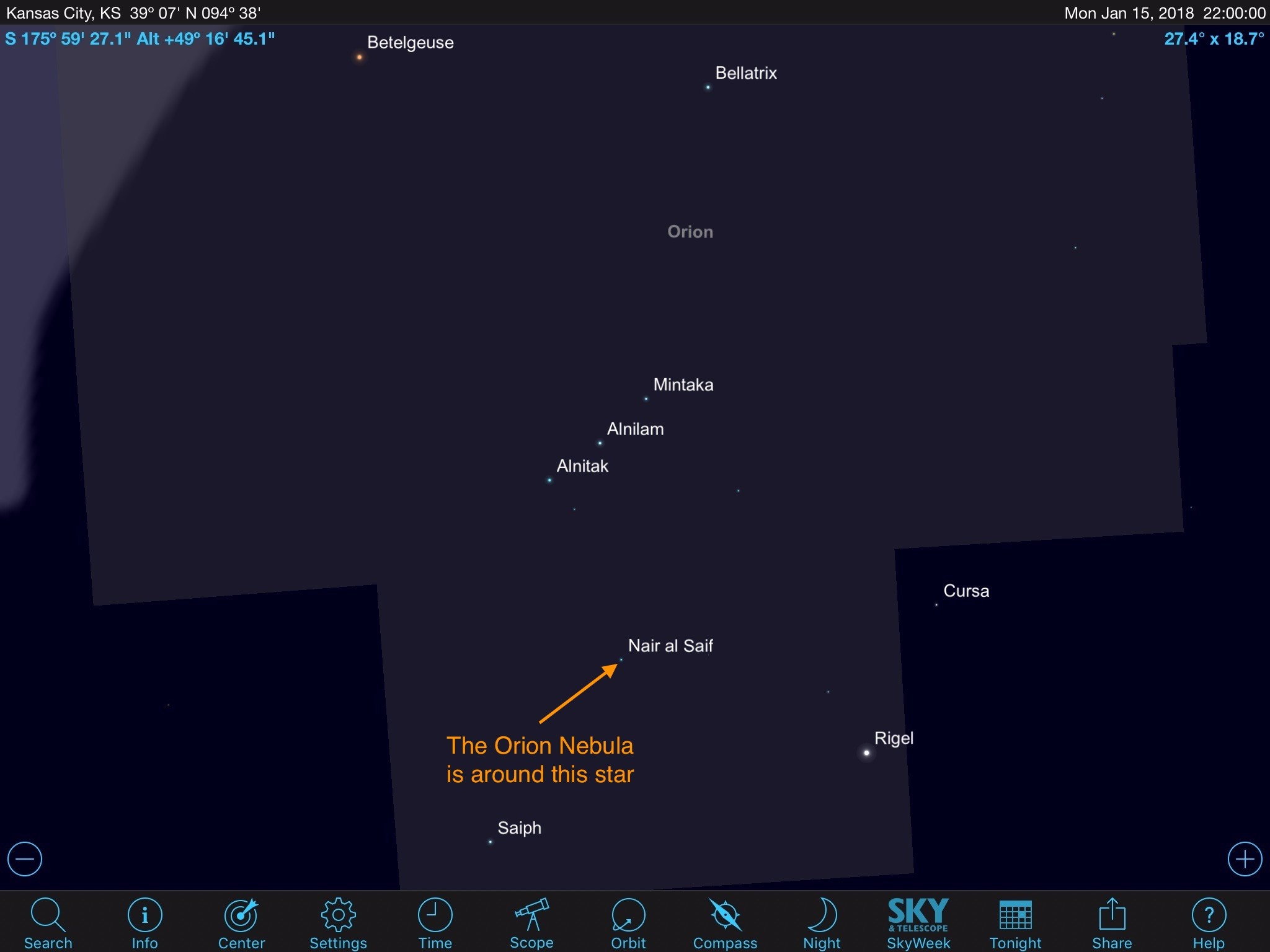 Although Messier catalogued them separately, M42 and M43 are two parts of the same nebula system, called the Orion Nebula. They are an easy find even with a low powered scope and are visible to the naked eye under very dark skies.

The easiest way to find it is start with Alnilam, the middle star in Orion's 'belt', and go directly down from there to a line of three fainter (but still bright) stars, which are said to be Orion's 'sword'. Above the bottom star of the 'sword', Nair al Saif, is where the nebula is found. 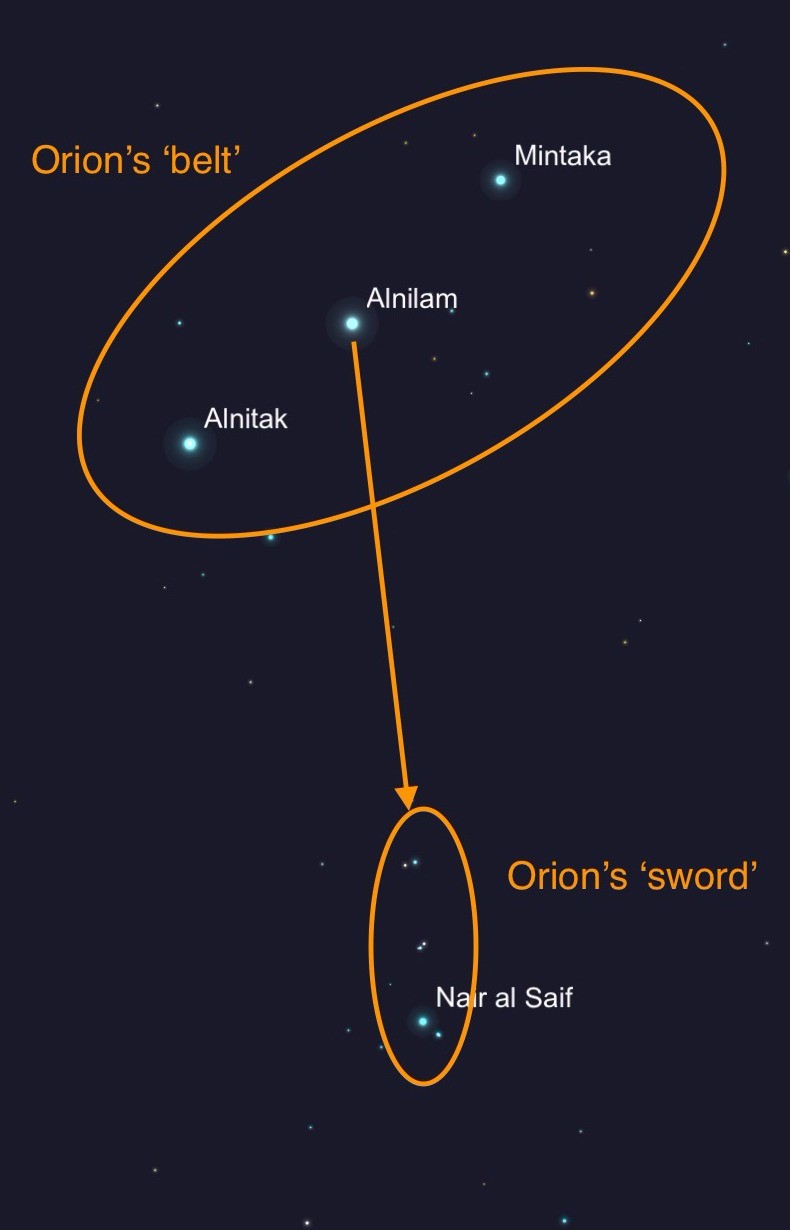 Finally, if I add the 7° finderscope ring (blue) and Telrad circles (red) you can see exactly where to look. I've also included stars to magnitude 6.5 now and images of the nebulae themselves, which you will see through a magnifying finderscope (although they won't be as clear and bright as this in your scope).

Finderscope Rings and Stars to Magnitude 6.5 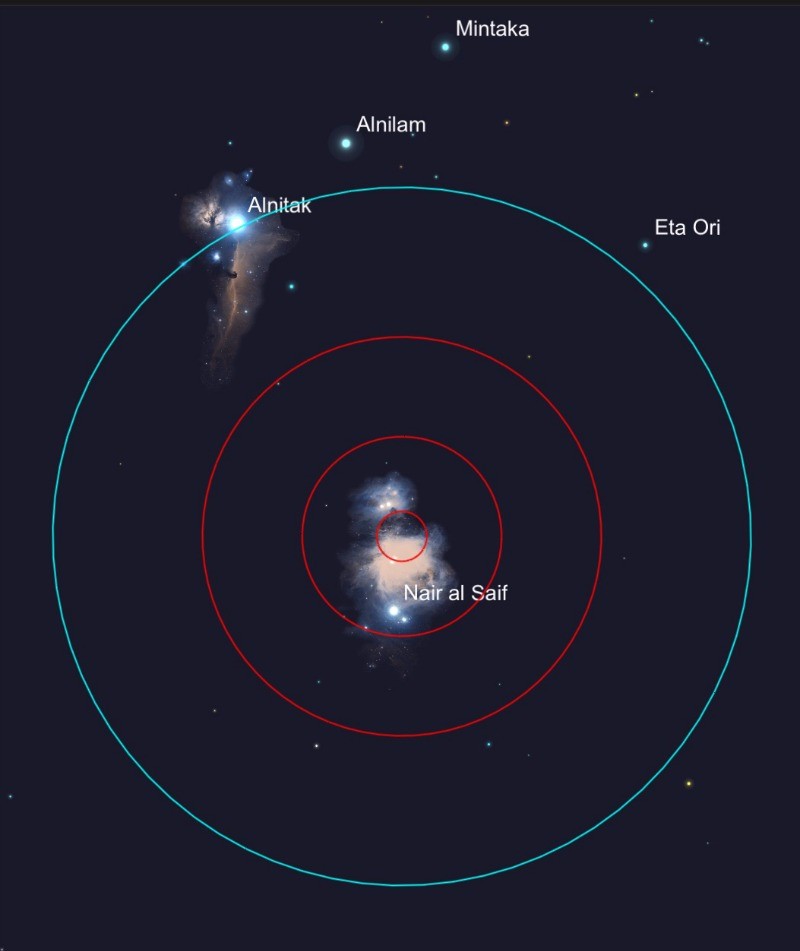 Now you know where to find it, what should you expect to see at your eyepiece?

About the Orion Nebula (what to expect)

As with all nebulae, the darker your sky, the more detail you can expect to see. In fact, under a dark sky, you can see the Orion Nebula with the naked eye. However, as bright as this one is, there will be scant color in your eyepiece and certainly nothing reminiscent of the gorgeous photographs - like the one below - which you may be familiar with. It will be a hazy white/gray object in your eyepiece. 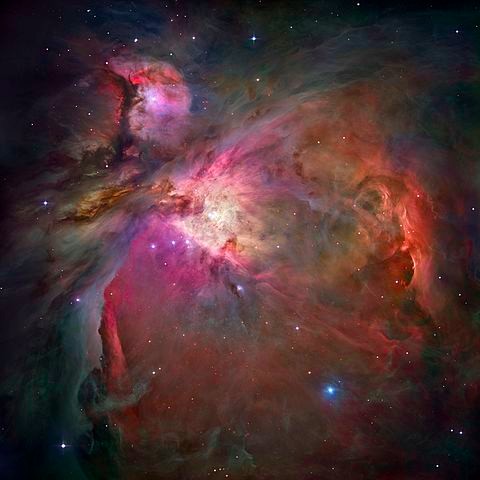 Orion's nebula is an 'emission nebula' which means the emissions of stars within the nebula are causing the gas we see to shine brightly.

There are four bright stars at the heart of the Orion Nebula, collectively know as the Trapezium. It is ultraviolet radiation from these stars which causes the surrounding gas to glow pink in the pictures we see like the one above.

For your personal viewing pleasure, I recommend a lower power eyepiece to allow you to take in the whole beauty of the area. You should be able to see the two separate nebulae M42 and M43, as per the picture above.

Use averted vision to see the gas lanes and channels within the nebula. It is around 13000 light years away from us and about 25 light years across. Inside it, bright young stars being born.

When you are ready, it's time to try and see the Trapezium itself.

Change your eyepiece to one offering higher magnification. As long as conditions are good, you should be able to find four closely packed stars in the shape of a diamond at the heart of M42. This is the Trapezium, the source of the glowing joy of the Orion Nebula.

Finding it is straightforward. The middle star of Orion's sword actually looks like a double star, even to the naked eye in good conditions. The star to the right of the pair (assuming the sword is pointing down towards the horizon) is actually Trapezium itself, as the zoomed in picture below shows. The red circle is the 0.5° Telrad circle which I've included to give a sense of scale.

The Trapezium Inside a 0.5° Telrad Circle 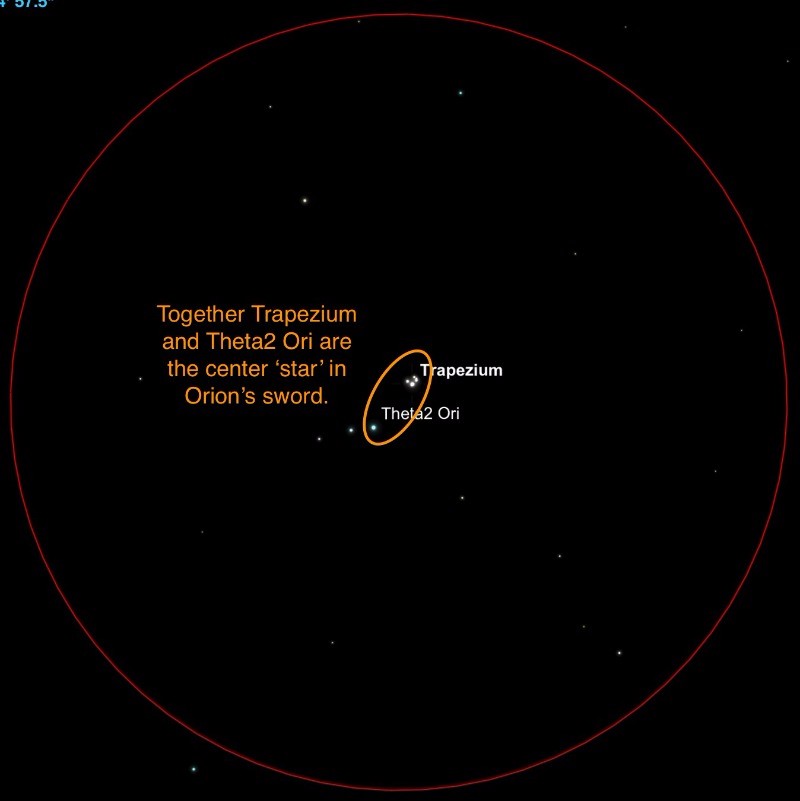 Try and resolve the four brightest stars as well as you can. Do you see the fainter stars, there are 6 available to telescopes of up to 6 inch diameter under good conditions.

When you have had your enjoyment with the Orion Nebula, it's time to hunt for an easy-to-find and beautiful Messier object, the Pleiades.